The ObdTuner software is developed for the GM Z22SE Ecotec engine, also known as the GM L61 in other countries. This engine is a member of the L850 GM Ecotec family and is in production since 2000. The L850 engine family replaced the GM Family II engine, the GM 122 engine, the Saab H engine, and the Quad 4 engine. 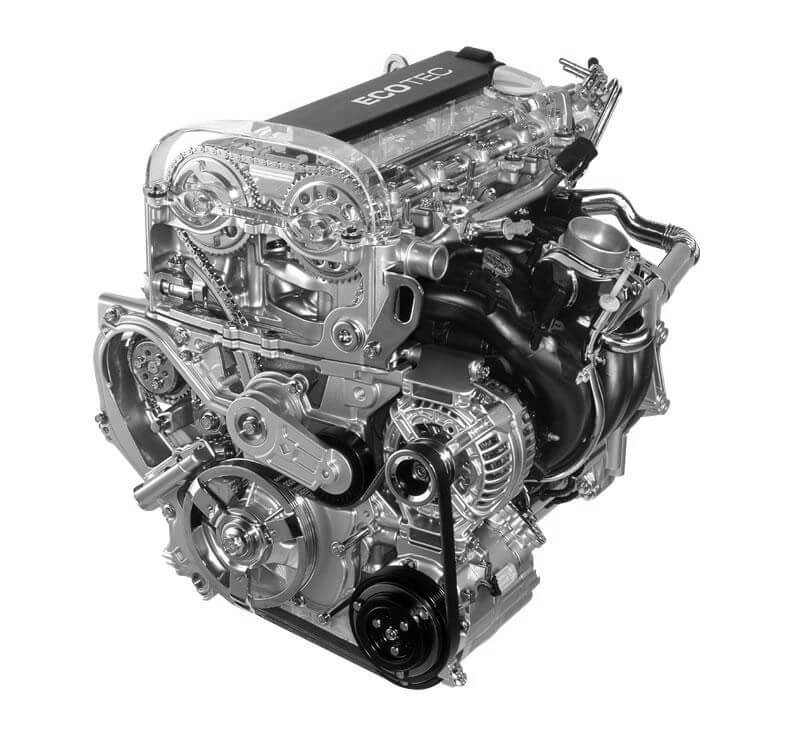 Lately also other members of the L850 Ecotec family are used with the ObdTuner software. Because of their similar dimension it is an easy replacement, for instance the B207 Saab engine has become a popular replacement engine. 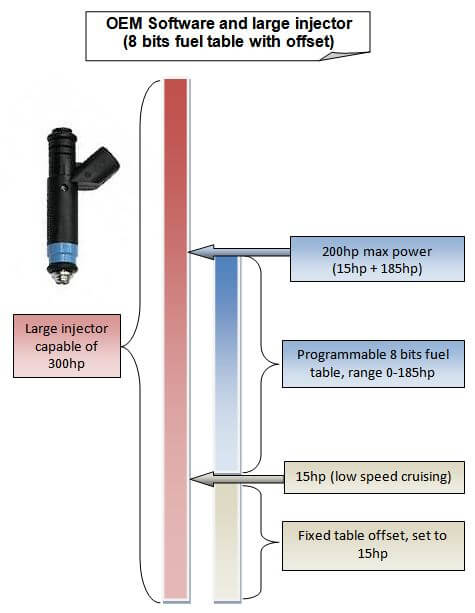 The fixed table offset value is not read from a table, but is one value which only can be changed in the calibration section of the ECU. With this value the minimum amount of fuel is set.

The second value for setting the amount of fuel is an 8 bit value read from the fuel table. This value has a range from 0-255 and is RPM and throttle position dependant. The offset value and the table value together determine the maximum and minimum amount of fuel. In practice this means when the lower limit is set to 15hp, the maximum horse power is limited to more or less 200hp. This system works fine for an engine producing less than 200hp, but for an engine capable of more, we get into trouble. Increasing the table offset is no option because the desired horsepower for low speed cruising will not change with a more powerful engine. This means increasing the table offset will give a too rich fuel mixture with low speed cruising. The tuner cannot change the way the ECU operates, so he must use other ways to get enough fuel into the engine, often the table offset is increased as much as possible to keep the engine running without misfires meaning it will run too rich when cruising.

Often increasing the table offset is not enough, so also the static flow value for the injectors is changed but in the wrong direction. The static injector flow is the maximum amount of fuel the injector can flow when it is continuously kept open. Changing the static flow to a smaller value, will give the ECU the impression there is a smaller injector mounted and will therefore increase the injector time resulting in more fuel. The static flow is one of the fundamental values the ECU uses for calculating the necessary fuel quantity. So programming a wrong static flow will lead to more fuel at wide open throttle, it will also lead to bad starting, poor warming up, poor throttle response and poor weather adaptation. The result is often a calibration which is good for maximum power, but will not run nice in most other circumstances. In some cases it will even trigger some of the emergency systems in the ECU, like continuous running of the fan, enabling the MIL, or switch to leap home mode.

With ObdTuner the fuel system is updated to 16 bits, as can be seen in the schematic below. There is no lower fuel limit and because the maximum table value is increased from 8 to 16 bits, there is also no practical upper limit.

So if a table range from 0 to 255 gives you a range of 185 horse power, a table value of 0-65535 will give a range of over 47000hp without loss of precision. So with the 16 bits tables there is no practical lower or upper limit. There is no need for compromises anymore, the injector data can be programmed correctly. Now the fuel table can be programmed as it should be resulting in an engine running fine in all circumstances not only at wide open throttle. It will also lead to lower fuel consumption when low speed cruising. Good start behaviour. Good warming up and weather adaptation. Good throttle response because the ECU does not have to compensate with its fuel trims. And of course good full throttle fuelling with more than enough margin for very large injectors.

Why is an EGR cheater not a good idea?

Most Z22SE engines are equipped with an EGR (Exhaust Gas Recycle) valve. The function of this valve is to lower the combustion temperature and it also improves the fuel mileage. EGR works by recirculating a portion of an engine's exhaust gas back to the engine cylinders. This dilutes the O2 in the incoming air stream and provides gases inert to combustion to act as absorbents of combustion heat to reduce peak in-cylinder temperatures which reduces the production of NOx. In a gasoline engine this inert exhaust gas also displaces the amount of combustible matter in the cylinder and therefore reducing the cylinder capacity of the engine which leads to a lower fuel consumption.

In most countries the EGR valve is not necessary to meet the exhaust emission regulation and for some engine setups like the GM LSJ engine there even is no place to connect the EGR valve to. So for a Z22SE which is equipped with an LSJ supercharger a common solution is to only remove the piping for the EGR valve but leave the EGR valve itself connected to the wiring loom. This way the ECU will not notice it is not working and will set no error codes. Another possibility is to replace the EGR valve with a so called EGR cheater. The problem with these approach is when the ECU opens the EGR valve it expects inert exhaust gasses entering the engine and will reduce the amount of injected fuel, this can be up to 20%. In reality no exhaust gas has entered the engine, so there is much more oxygen in comparison to what the ECU expects and the engine will run lean. When this happens the lambda feedback system will notice the lean running and starts to correct this so after a while the mixture will be OK as long as the conditions stay the same. When the EGR is closed by the ECU the opposite does happen and the engine will run rich for a while. Because the mixture correction through the lambda feedback system are slow and only work for lambda 1.00, the result will be an engine which does not feel responsive or does even produces some hick-ups before picking up again.

With ObdTuner it is possible to disable the EGR valve. The benefit of this is the ECU now knows there is no EGR valve connected and will therefore not try to use it. Therefore the ECU knows there is no inert gas entering the engine and the fuel mixture will be spot on improving throttle response. Also the EGR valve can now be removed completely and no cheater has to be installed plus the EGR port can be used for other purposes.